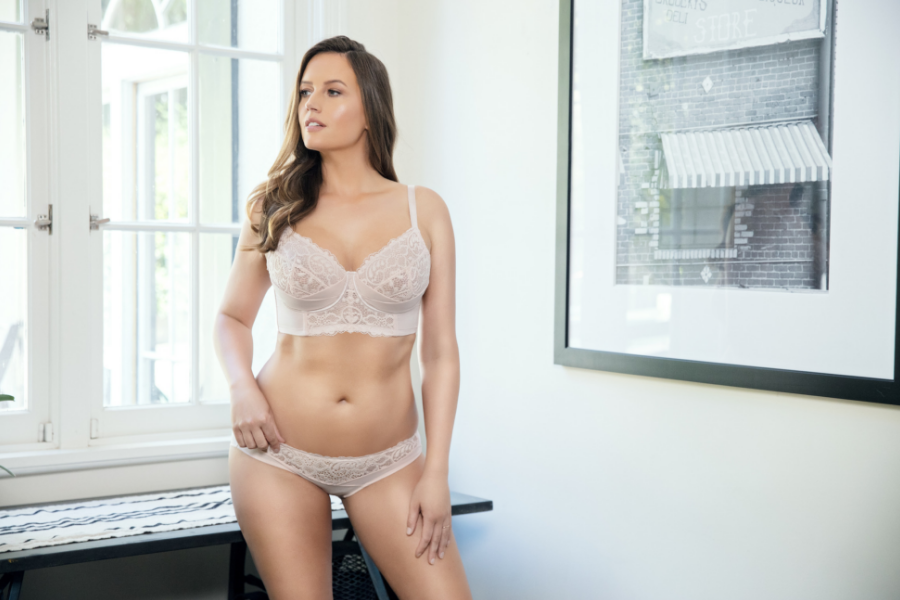 In the lingerie industry, a lot of terminology gets thrown around that can make it seem intimidating for the newcomer. From working out the difference between a full-cup bra and a balconette, to discovering new words and phrases such as ‘gore‘ or ‘sister sizing‘, there’s a lot to learn about.

As someone who works in this industry however, I sometimes forget that even some of the most commonly-used terminology can be confusing too. And a great example of this is ‘full bust’ versus ‘plus size’.

But to be clear, full bust and plus size do not mean the same thing. Here’s the difference…

What is full bust lingerie?

‘Full bust’ is a term that applies to a distinct range of cup sizes, specifically anything that’s a DD or above. Note that it’s separate from the term ‘full cup’, which is a style of bra cup and can be made in any size.

Some people associate anything above around a D cup with having a high body fat percentage, and therefore with being plus sized. But of course, that isn’t always true.

Others confuse the terms because they have a fundamental lack of understanding about how bra sizing works. To summarise, the number refers (generally speaking) to the size of the ribcage, and the letter refers to how much difference there is between that measurement and the one around the breasts. A person who wears a 30F and a person who wears a 38F will be quite differently-sized people, despite sharing the same cup letter.

In fact, it’s not just their overall body size that will differ – those two people will even have very differently-sized breasts. An ‘F’ is not a fixed size. As described above, the letter is only meaningful relative to an accompanying band size.

This means that you can absolutely be full-busted and have breasts that you don’t think of as being huge. 30DD breasts are full-busted, yes. But they fill the same volume as 32D, 34C, 36B and 38A breasts, none of which are full bust sizes.

So all full bust really means is that you have at least 5″ difference between your ribcage and your bust measurement (because 1″ difference = 1 cup size).

What is plus size lingerie?

For bras, ‘plus size’ relates to the band size, and means anything that’s a 38 and above, or a 40 and above. There are a couple of reasons that the industry can’t agree on precisely where plus size bra sizing starts.

One is that ‘core sizing’, which refers to the commonly-available size range of 32-38 bands and A-D cups, includes 38 band sizes. So some brands only consider extended sizing that goes beyond the norm, i.e. a 40+ band, to be plus sized.

Another reason is that people of different clothing sizes can wear the same band size. A muscular person may need a larger band size than someone else with the same ribcage measurement, for example. So there will be 38 band size wears who wear plus sized outerwear, and those who don’t. And conversely, many people who would be considered plus sized for clothing such as tops and dresses actually wear a 36 or even 34 band size on their bras.

For bottoms, loungewear and other lingerie sold by standard clothing sizes however, plus size begins at the same place as for outerwear – generally a US 12-14 or UK 16-18 and larger.

In conclusion, ‘full bust’ and ‘plus size’ terms are completely separate. You can be both, neither, or just one. You can need a plus sized bra and be an A cup, or you can be very slim and be full-busted. And knowing the difference between the two will help you to better search for retailers and products that cater to you.

We use cookies to ensure that we give you the best experience on our website. If you continue to use this site we will assume that you are happy with it.
OK

ENTER YOUR EMAIL AND GET

Be the first to know about our exclusive items, Special Sales, New Arrivals, Exclusive Finds (Basically FYI's on the important stuff)

* Please note that by supplying your email address for this discount, you will be added to the Inner Secrets mailing list.

**Only for use in our online shop. Voucher cannot be used in conjunction with any other discount or coupon. Voucher not redeemable on sale goods.